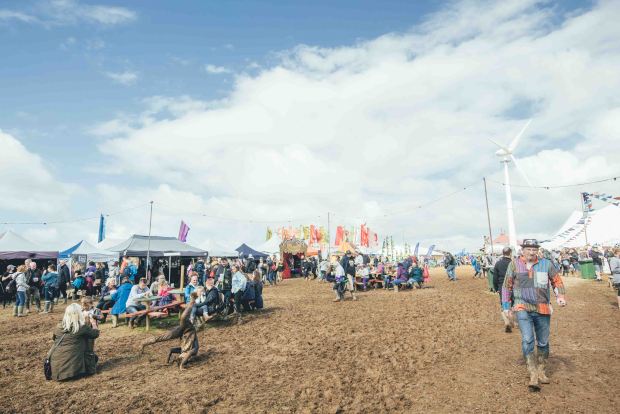 Artists and music-lovers braved the mud this weekend to celebrate the fifth year of Little Orchard Cider & Music Festival. Despite challenging conditions caused by the wind and rain it failed to dampen spirits as thousands of party-goers armed with wellie boots descended on Healey’s Cyder Farm. With spectacular sets from Scouting For Girls, Hothouse Flowers, The Wurzels and The Neville Staple Band, the magical little Cornish party didn’t let the bad weather stand in its way.

Headlining on the Saturday evening was British pop band Scouting For Girls. You can never have a  bad set from Scouting for Girls – they have non stop hits and a great stage presence which brings a real feel-good sing along mood to the crowd, despite the pretty grim weather.

The weather did cause some issues to the festival, the first thing we saw on arrival was another van being pulled out of the field by a tractor! However, despite this and the campsite having to be closed, the organisers did a great job of keeping the festival on track and sorting alternative accommodation areas.

Commenting on the event, festival organiser Ben Hall said: “This year we faced the worst weather conditions we have experienced since the festival launched five years ago. Despite the challenges, the festival went ahead and it was great to see how many people embraced the mud and enjoyed the music. Our team worked hard to ensure the festival remained safe and enjoyable. We would like to say a big thank you to everyone that attended and showed support.”

In addition to the live music there was also lots of other stuff going on across the weekend, one of our favourites being the silent disco. The silent disco was inside (yay for shelter from the rain) and was super busy, but the queue wasn’t too big so was the perfect size. We got straight in before heading to Scouting for Girls on the Saturday night and the DJs were all great. A good mix of music on all of the stations so there really was something for everyone.

We hope to be back next year and hopefully with some better weather too!