The Halloween Masked Ball returns to its nefarious nocturnal haunt at Los Flambardos, Helston, Cornwall, on Saturday October 28, for another chapter of devilish hedonism, this time taking its cue from the seven deadly sins. 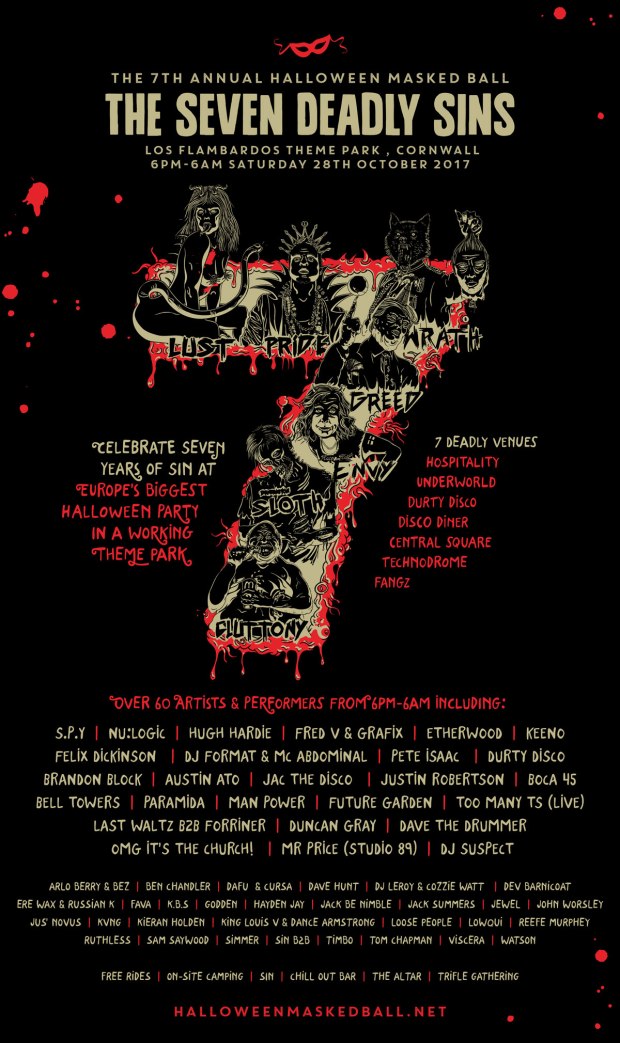 Seven deadly sins is an apt theme for the annual trip into the marvelous and macabre as it’s been seven times around the chopping block for the Halloween Masked Ball. You can be assured that the interpretation of the seven deadly sins – Masked Ball-style – will descend into a freefall of wanton debauchery

What are considered the most vile of all human behaviours – pride, greed, lust, envy, gluttony, wrath and sloth – will take on a much more indulgent meaning courtesy of the creative team behind the Masked Ball.

Each of the deadly sins will be represented at the Halloween Masked Ball across a myriad of themed venues.

Based at Los Flambardos – a sprawling theme park, just outside of Helston – the Halloween Masked Ball has grown to become one of the largest Halloween parties in Europe with the dedication to costume and outlandish dress equalling only the tenacity to party.

One of the much-lauded charms of the Masked Ball is the production and detail to the maze of venues augmented by a sterling line-up of DJs, acts and performers.

This year drum and bass heavyweights Hospitality return to the big top to shake the gates of hell with some of the UK’s best breakbeat talent including Fred V vs Graphix, Hugh Hardie, Nu:Logic, Keeno, Makoto, S.P.Y presents In The Dark, Etherwood and Randall B2B S.P.Y. 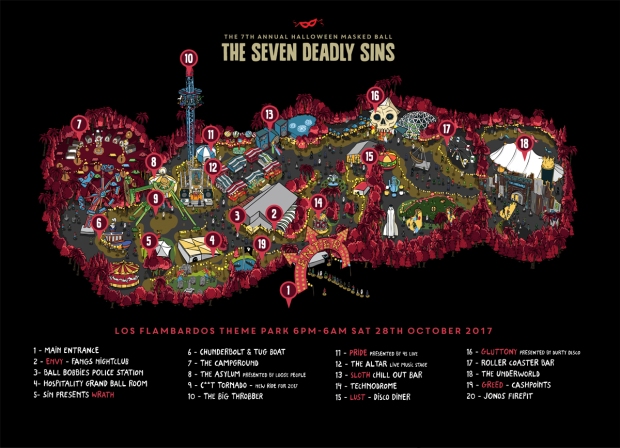 Kelvin said: ““Seven deadly sins is a great theme and something that the ballers themselves came up with so we are dying to get it in place at Flambards. We’ve also got two new stages to be showing everyone as well as a brand new white knuckle ride – Sky-Force. The team can’t wait.”

The devil is in the detail, as they say, so worshipped venues such as The Technodrome, The Underworld, Durty Disco, 45 Live, Oh My God, It’s The Church and Loose People are back in full swing – alongside some new additions.

All the hellraising, spine-chilling rides will be open at Los Flambardos – including the brand new the Sky-Force. Rising 25 metres above the ground exerting a force of up to 3G while spinning 360 degrees and carrying up to 40 people, the Sky-Force is the biggest ride in the south west and sure to extract some ear-shattering screams.

Since its inaugural event in 2006, hosted in the depths of darkest Cornwall, The Halloween Masked Ball is one of two of the bi-annual jamborees of hi-jinx, frivolity and hedonism that have earned the events a loyal following.

The Masked Ball is a walk on the wild side and boasts a strong and varied musical line-up, set among a myriad of curated, stunning venues. The party is a strange and surreal sideshow of fairground follies, rock ‘n’ roll posturing and freak show craziness, all waiting to be discovered in a nocturnal theme park where strange things happen. A myriad of rooms, dancefloors, dens, hidden bars and unpredictable nano-venues, eccentric humour and epic raves, set to a soundtrack of New York disco, primal chants, cosmic guitar licks and terrifying techno.

To grab yourself some tickets head to http://www.maskedball.net OR you could win some by checking out our facebook page here … http://www.facebook.com/beachbreakblog